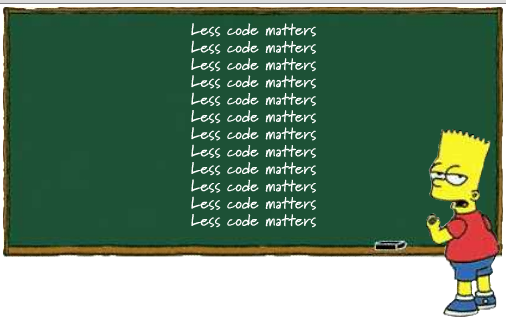 While learning WPF I encountered this example on Microsoft’s website. You can either scroll down or download the C# version of the code.

It’s about this code:

The entire inner if statement can be reduced to:

This reads very well in plain english (unlike the original version which is also longer):
“accepted means that the product’s current price is smaller than 25”.

Actually, the whole method can be rewritten as:

I really hate when people don’t understand boolean logic and write billions of lines of code that others have to read and maintain!

Regarding the example above: I would go even further. If we look at the method name we see that it shows bargains. This concept can be expressed more clearly in the code by creating a function isBargain in AuctionItem.
This is called the tell, don’t ask! principle.

Here’s how I would do it:

This type of logic should be in the domain model, not in the user interface as it was in the original code.

Here are some of the bad examples I encountered and how you can correct them. The examples are in java, but it shouldn’t matter.

Don’t compare a boolean with true! It is already true!

Other programmers have an urge to check the boolean when returning from a function.

Some other programmers use the ternary operator:

Here are some examples:

How can you avoid writing code as in the original example? Well, here are some tips:

The moral of the story

The C# code I showed in the beginning of the article is an example, a demo… no wonder why new programmers (and not only) write shitty code! When they start learning a new technology they only see piles of crap all over the Internet.

So, one moral is for software professionals to be more careful what type of code they use as examples (unlike Microsoft in this case).

What type of code YOU want to promote? Don’t forget that it always backfires and you end up working with people that will write the same kind of code.