In this blog post I’ll review a bit how Gradle works behind the scenes and how certain parts may seem magical if you don’t know Groovy. And, of course, I’ll explain how that DSL magic works. 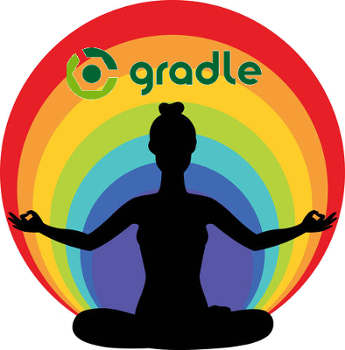 When I started learning Gradle this was one of the major blockers in doing something with it. If you don’t understand that magic then you’re limited to the examples in the documentation which aren’t that revealing and don’t help you when you have similar issues.

Warning! this blog post just tries to bring you closer to understanding Gradle, but it’s not an exact overview of how Gradle works.

Let’s say that you have a fairly standard java project. You’ll need the JUnit library, because, well, you do test your code, riiiight? We’ll add that as a dependency for the test code.

This is how the build script would look like:

Basically, what’s happening here is that you add the java plugin that automatically adds some defaults for building java projects.

Then you configure the repositories that tell Gradle where to download it’s dependencies from.

After that you tell that in order to compile the tests you need an external library that will be downloaded from the above defined repository.

A billion Gradle questions for a total noob

Now, if you have a java background that syntax looks fairly alien. It seems like a dedicated language for specifying builds. But how does it work? What is apply or repositories or dependencies? How do I know what’s available so I can do my work? What’s that curly braces thing?! It looks like a code block… What about that testCompile? I don’t see where it is defined… I don’t even know what it is and what I can do with it…

I had all these questions initially and although I could create a basic Gradle script I couldn’t undestand it or make it do something that wasn’t described in the Gradle user guide.

After reading the documentation, Gradle DSLs, the Gradle forums and lots of Googling I achieved nirvana. That is: the Gradle nirvana.

First, those apply, repositories, and dependencies thingys are just normal methods. You may ask: “Wooaah! Methods! But if they are methods then they must belong to an object, right?” Yes, they are defined in the Project class. Once you know this, more things start to get clearer. Now if there’s something you don’t understand you can look it up in the Project class documentation: method definition, etc.

Now, the way you call these methods may seem a bit strange. For example, what is that curly brace thing? It’s a Groovy closure! It’s something like an anonymous method that can be passed as a parameter to other methods. It’s actually implemented as an anonymous java class with just one method.

Here’s how to make that testCompile thing - add the following code to build.gradle and run it with ./gradle -q:

Ok, so I’ll take you through all the above code, since it’s quite a lot to take at once. First, I used dependencies2 so my code doesn’t conflict with what’s already provided in Gradle and it shouldn’t affect your understanding anyway :).

I left the supporting code in the same script so you can see and understand how everything works.

It may not seem a method call, since in java you have to put parenthesis like this: dependencies2( /* method arguments */ ). Well, in Groovy (which Gradle builds on top), the parenthesis are optional if you have at least one argument (if there’s no argument you MUST use them).

Now, things get confusing again: there are no arguments for the dependencies2 method call (or so it seems). And again, that certainly doesn’t look like a method call! How can a method call have a “definition code block”?!

Well, let’s rewrite that section of the code without using Groovy magic/syntactic sugar so it’s a bit more clear.

Now you can clearly see that we have a method call. What about the testCompile? Well, that’s a method call too. Just add the paranthesis and everything becomes clear again: testCompile('junit:junit:4.11').

Now, to understand how it’s possible to call the testCompile method even though it’s in another class let’s review the first part:

Now you need to understand one cool thing about closures: you can “delegate” method calls that are not defined in them to an object. In our case this object is of type: DependencySpec. So this means that when you call a method in the configuration closure it will be “forwarded” to a DependencySpec.

To achieve this you have to set the closure’s delegate to our object AND set the resolveStrategy to Closure.DELEGATE_FIRST so Groovy/Gradle knows that it should first look for any undefined thingy in our own object.

The Groovy closures practically hold the (Gradle) Universe together. They are the key to understanding Gradle and getting to a productive level with it.

You can read more about Groovy closures to get a better understanding.