This post is regarding reducing boilerplate code when implementing the MVVM pattern for WPF applications. One of the great things about MVVM is that you can bind properties to GUI elements and when you change one of them the other will update automatically. To get this to work you need to implement the INotifyPropertyChanged interface.

Normally you’d create an ObservableObject similar to this:

Let’s say that you have an Item class and you want to bind it’s properties to the GUI. Here’s the class:

And here’s the GUI:

When you want to use binding you cannot use automatic properties so you have to provide similar implementations for all of them. Add a private field, make the getter return it and the setter call the OnPropertyChanged method from ObservableObject. It’s not difficult, but it’s code that I don’t want to write and I don’t want to see - because it’s code that has no (business) logic in it and it’s highly repetitive.

Of course, you might argue that if I don’t want to see them then I could use those #region directives, but I feel like I’m sweeping them under the carpet. It doesn’t really solve the problem. Some people (me being one of them) recommend that you shouldn’t use regions.

Fody is a “tool for weaving .net assemblies”. Probably this short intro doesn’t tell you much so here’s my explanation: Fody adds new attributes (based on the plugins you use) that generate (Intermediate Language) code during the build. That IL code is code that you don’t see and you don’t write, but does the job. It’s basically eliminating boilerplate code - really similar code that you must always write that doesn’t achieve much.

How to use it

In Visual Studio add the Nuget package for PropertyChanged.Fody: 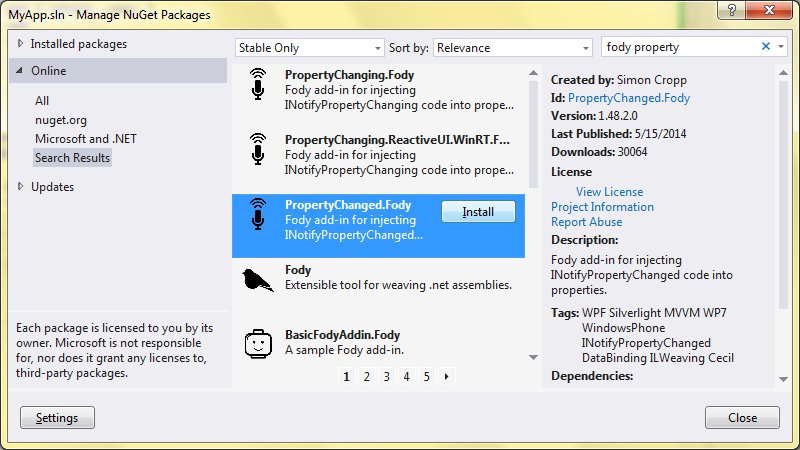 After installing it just add the [ImplementPropertyChanged] attribute and the automatic properties. Here’s the Item class again:

I know that this isn’t much, but considering that in a normal project you can have a lot more properties this is pretty nice.

Fody way: 1 line for each property (disregarding the attribute line, since it’s once per class)

This looks to me like a major win: 10 times less code!

There are a lot of other cool plugins for Fody like: Equals and ToString (among many others). It’s worth checking them out.

The full code that I used for this blog post is available on GitHub: