Asynchronous programming causes a lot of confusion because the documentation is a bit lacking and this results in awfully bad implementations. This post compiles my research on this subject so you’ll see lots of quotes from various sources (official and trusted third parties).

To clear up the confusion we’re going to see what all the fancy words below actually mean:

Multithreading is the ability of a central processing unit (CPU) or a single core in a multi-core processor to execute multiple processes or threads concurrently, appropriately supported by the operating system.

Concurrency is when two or more tasks can start, run, and complete in overlapping time periods. It doesn’t necessarily mean they’ll ever both be running at the same instant. For example, multitasking on a single-core machine.

Parallelism is when tasks literally run at the same time, e.g., on a multicore processor.

This post is about asynchronous programming in C# with the Task-based Asynchronous Pattern, so let’s see when and how to use it. There are 2 types of operations that have to be considered: CPU bound and I/O bound when deciding what to use. Here’s what Stephen Toub has to say about this:

Both compute-bound and I/O-bound asynchronous operations may be implemented as TAP methods. However, when exposed publicly from a library, TAP implementations should only be provided for workloads that involve I/O-bound operations (they may also involve computation, but should not be purely computation). If a method is purely compute-bound, it should be exposed only as a synchronous implementation; a consumer may then choose whether to wrap an invocation of that synchronous method into a Task for their own purposes of offloading the work to another thread and/or to achieve parallelism.

At the API level, the way to achieve waiting without blocking is to provide callbacks. For Tasks, this is achieved through methods like ContinueWith. Language-based asynchrony support hides callbacks by allowing asynchronous operations to be awaited within normal control flow, with compiler-generated code targeting this same API-level support.

source: the TAP.docx document (check in the resources below)

The essential information is this:

What is CPU bound?

Sometimes concepts are difficult to follow without proper examples. CPU bound or compute bound means that you have a problem to solve/calculate and you actively need to use the processor to perform the calculation. One such example (maybe not the best one, but it illustrates my point exactly) would be calculating the sine of an angle. This is pointless (we’re not even storing the result), but is a great example of a CPU bound operation:

What is I/O bound?

I/O bound means that you request the disk to save or load some information for example. Another example would be requesting to download a file from an HTTP server like below:

Downloading is a network operation which requires opening a TCP connection to a server and receiving data through multiple network devices (ex. routers) - this operation takes time. One (wrong) way of doing it is to offload the work to a separate thread, but then this thread will get execution time from the CPU for doing nothing else then waiting for the server to send back a response.

The right way to do the download would be to use the async methods provided by .NET. These are actually wrappers for native code that actually do the work in an async way, meaning sending the request to the server and then suspending the thread until it gets the response back.

More importantly, because I/O-bound work spends virtually no time on the CPU, dedicating an entire CPU thread to perform barely any useful work would be a poor use of resources.

The call to GetStringAsync() calls through lower-level .NET libraries (perhaps calling other async methods) until it reaches a P/Invoke interop call into a native networking library. The native library may subsequently call into a System API call (such as write() to a socket on Linux). A task object will be created at the native/managed boundary, possibly using TaskCompletionSource. The task object will be passed up through the layers, possibly operated on or directly returned, eventually returned to the initial caller.

A program is CPU bound if it would go faster if the CPU were faster, i.e. it spends the majority of its time simply using the CPU (doing calculations). A program that computes new digits of π will typically be CPU-bound, it’s just crunching numbers.

A program is I/O bound if it would go faster if the I/O subsystem was faster. Which exact I/O system is meant can vary; I typically associate it with disk. A program that looks through a huge file for some data will often be I/O bound, since the bottleneck is then the reading of the data from disk.

For more info on how to use the Parallel Stacks feature please check the Official MSDN Walkthrough: Debugging a Parallel Application in Visual Studio.

NOTE: all the examples below are done on a single machine and in the same conditions. If you do them you’ll get different numbers but you should have the same relative performance and resource usage.

The bad use of async I/O

The implementation below is stupid! NEVER DO THIS!!! I did it just to show you what actually happens when you do it and to demonstrate that it’s an extremely bad way of achieving what you want.

In this case the download takes 29 seconds and uses 10 worker threads (and 14 threads in total). You can verify this by running the app, pressing the button and then Break All from Visual Studio to get the status in Parallel Stacks window. 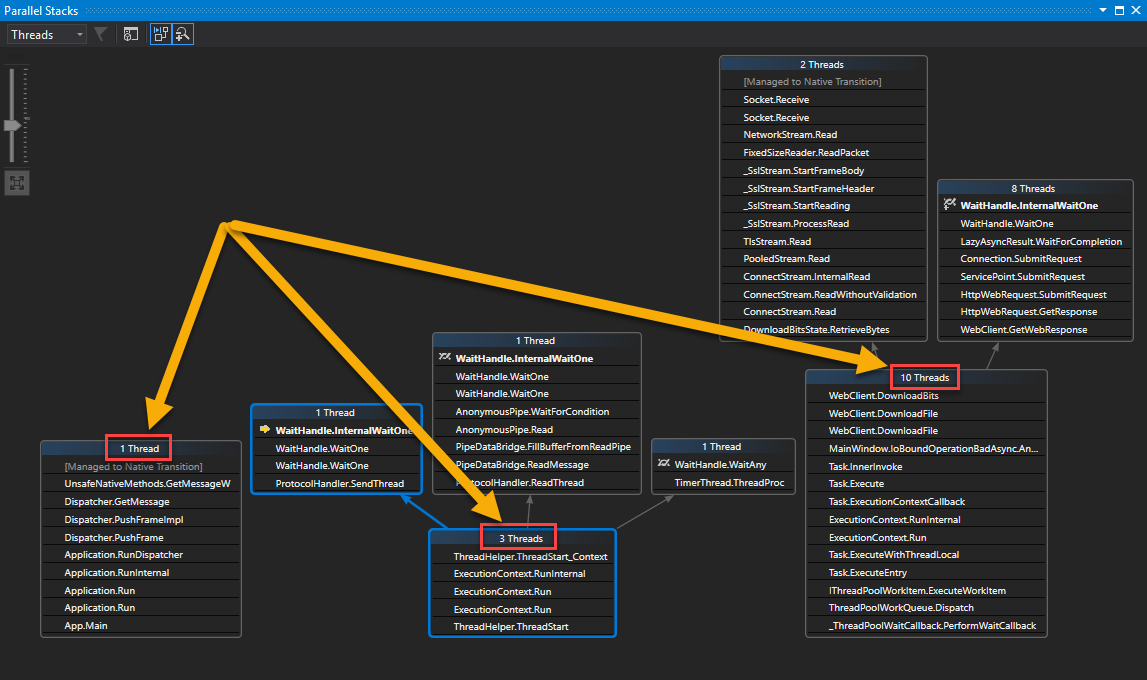 The good use of async I/O

In this example I used the special async method from WebClient that downloads a file in an async way. It took only 24 seconds and used no worker threads. The 4 threads you see in the screenshot below are from the thread pool that’s created for all apps anyway.

Compared to the previous example (for the bad I/O) this one was not only faster, but also didn’t use any worker threads! By using less, we achieved more! 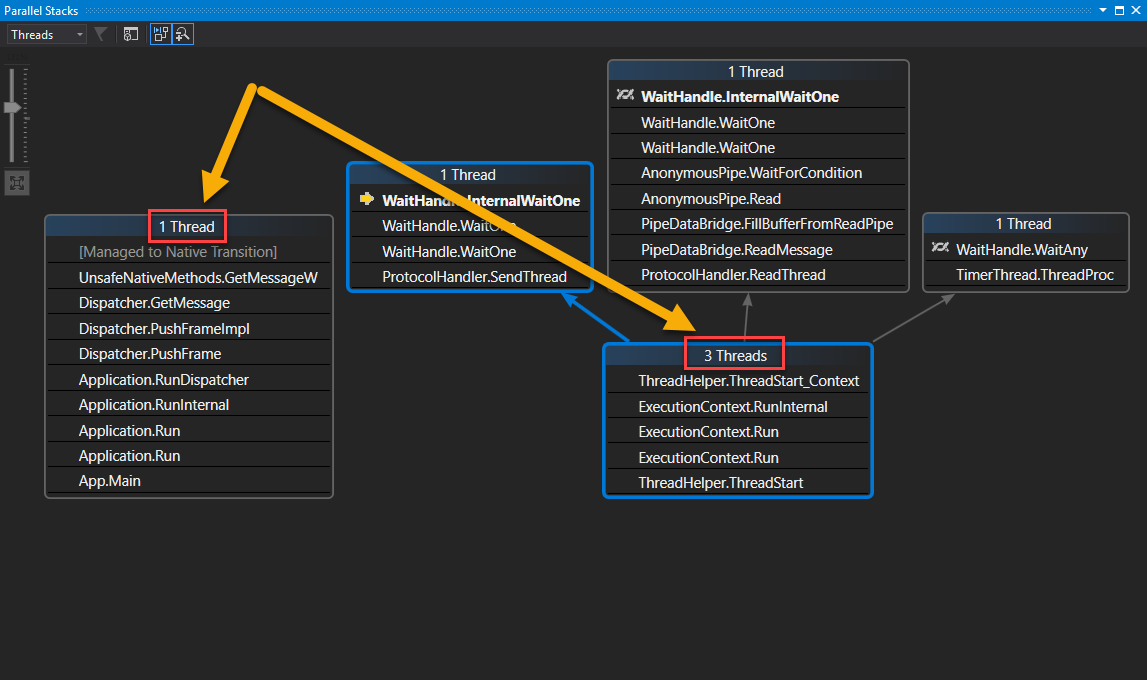 The good use of async CPU

In this case the operation took 12 seconds and 8 worker threads - you may wonder why not 10 (since we used Task.Run in a loop of 10 iterations)? The answer is simple Task.Run only queues the given work on the thread pool which automatically adjusts the number of threads it uses - that means it doesn’t start a new thread every time you call Task.Run.

This is a good example of when to use Task.Run for CPU bound code. A really bad way of doing this would be to have Task.Run inside the Math.Sin implementation (not that you can control that, it’s just an example: it could be in a CPU bound method that you could write): always leave calls to Task.Run at the highest level possible - definitely not in library methods (or any lower level APIs for that matter). 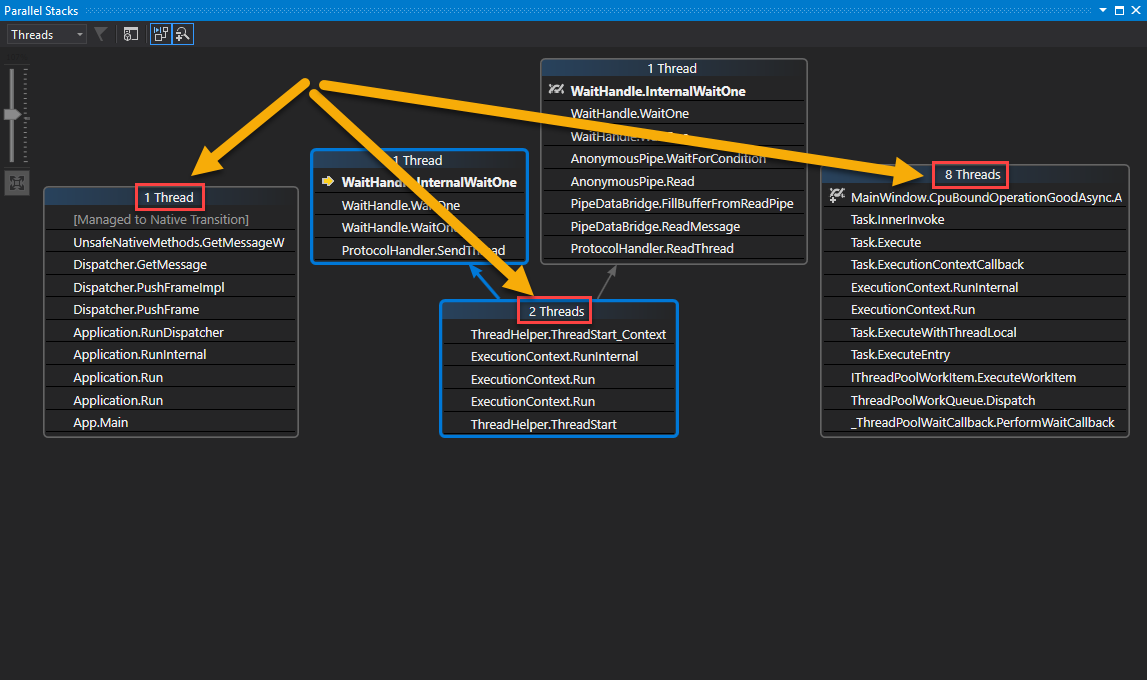 If you’d like to read more about when to use Task.Run please check out this blog post from Stephen Cleary: Task.Run Etiquette and Proper Usage.

How do I made an async method? And how do I use async/await?

Put simply, you start by writing the normal synchronous method and then check what methods can be called asynchronously.

These types have async methods that you can use for true asynchronous/non-blocking I/O with the web/filesystem:

There’s a great presentation given by this guy (check out the resources section) that you should watch. I extracted the tips that I find absolutely essential: 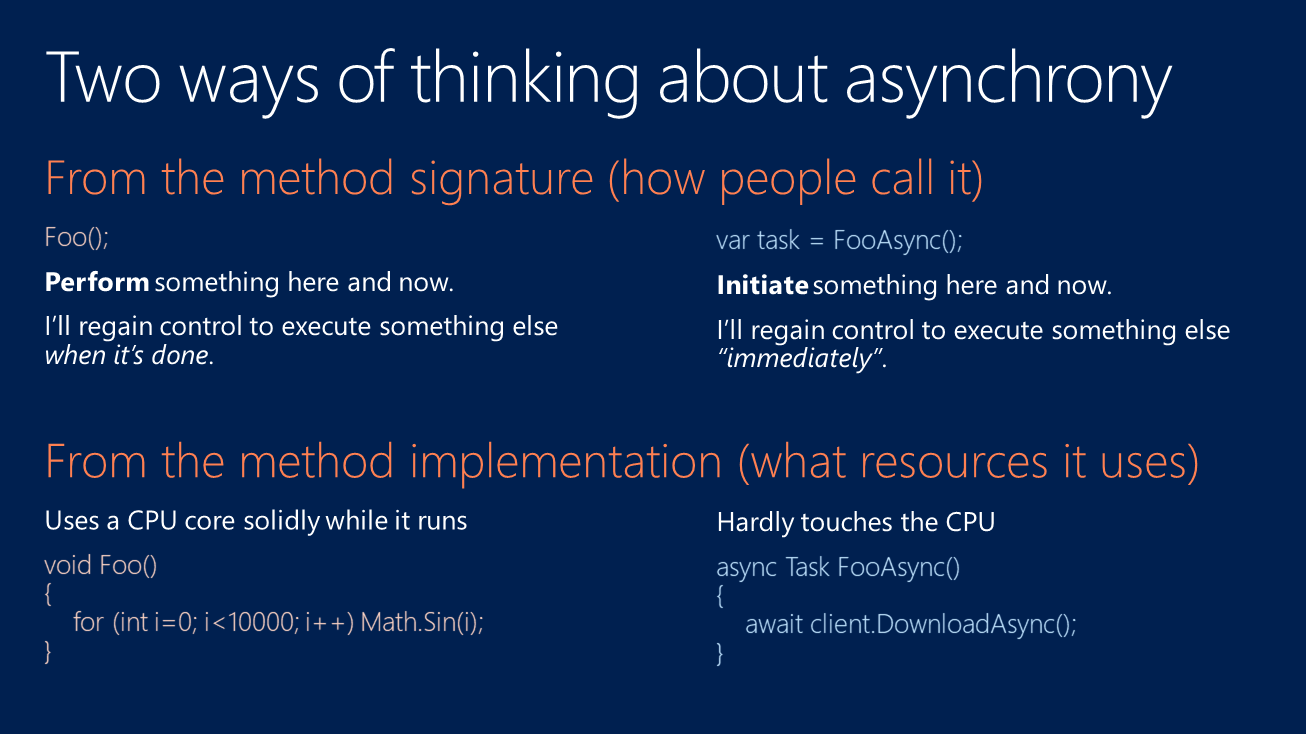 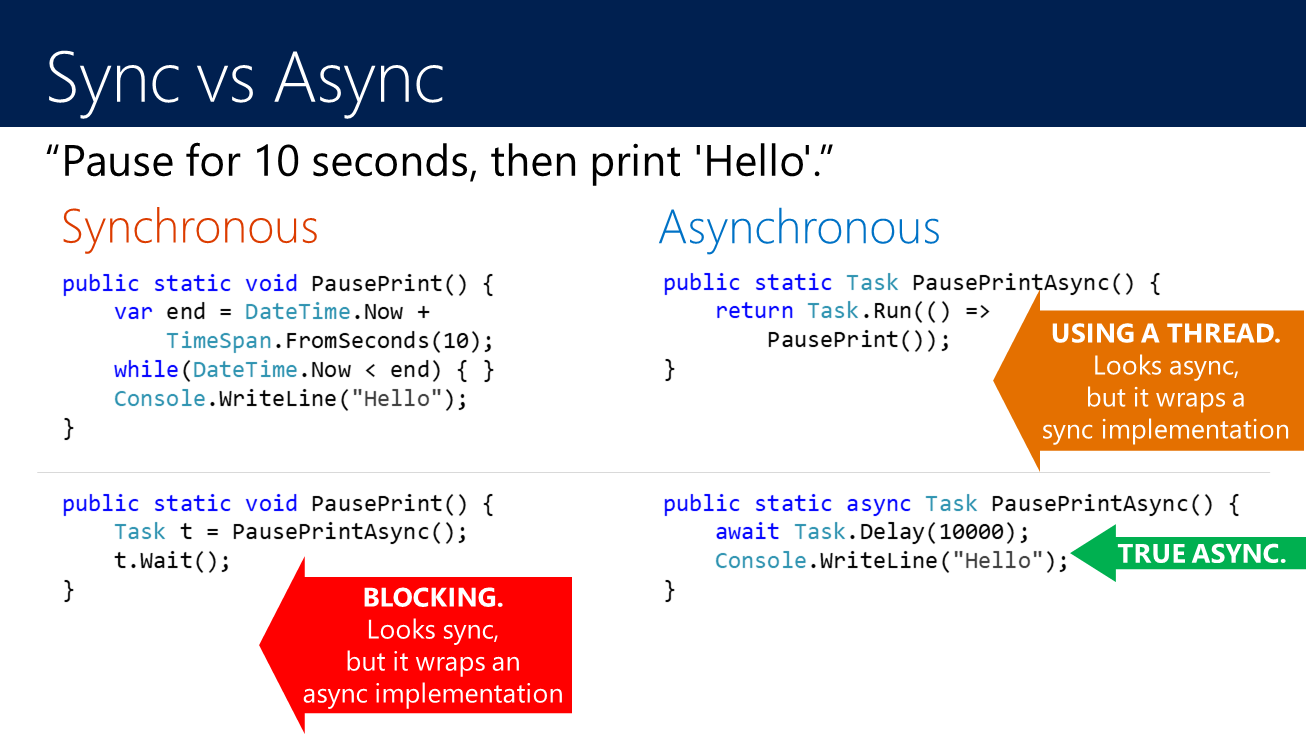 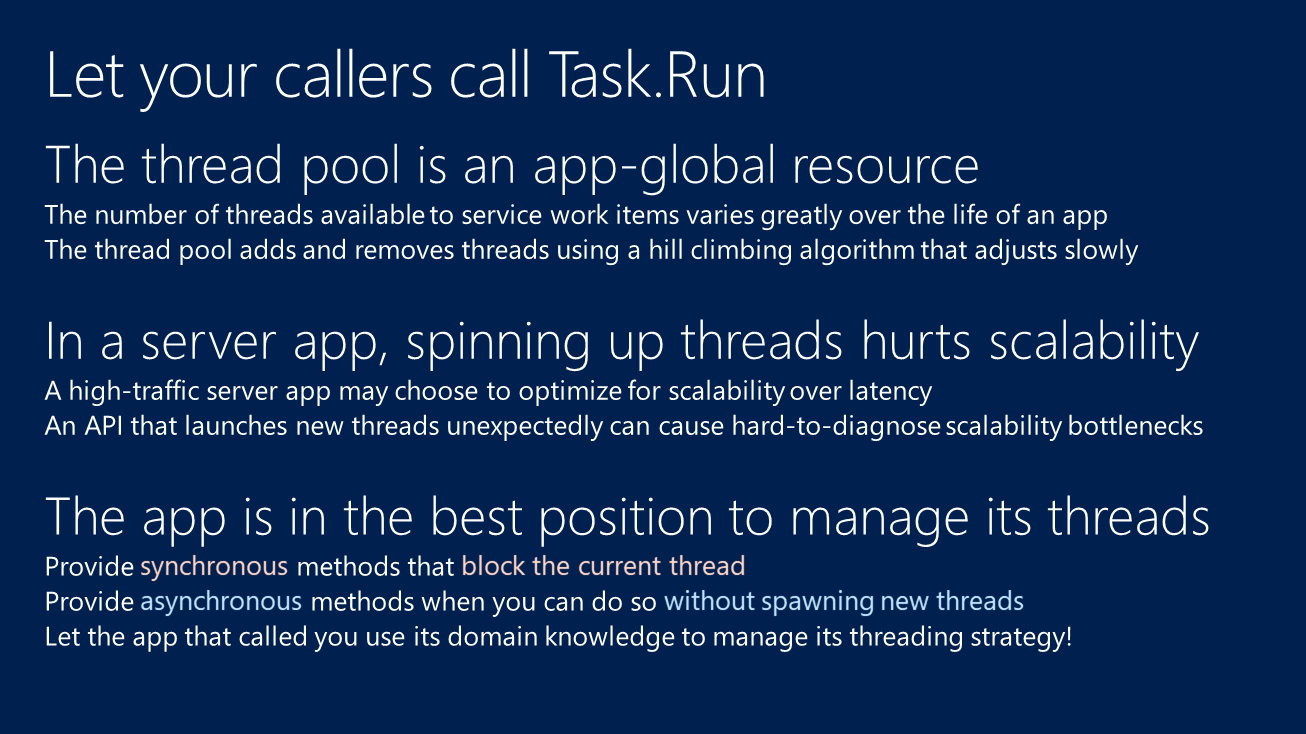 The full source code is available on GitHub. You can clone the repo and try it locally.

These resources are official, which means that they are either written by Microsoft or recommended/recognized by them.

Lucian Wischik is a Senior Program Manager for Managed Languages at Microsoft. He made several presentations at conferences that explain in depth what to do in various scenarios related to asynchronous programming:

Stephen Cleary is a Microsoft MVP.